Set up in 1993 by a group of women academics who wanted to encourage research and stimulate interest in women's history and gender history in the south west of Britain.

A Symposium on Women in the 1920s   Saturday 18 September 2021, 10.30 to 15.30
Keynote speaker Professor Maggie Andrews
This event was held  on Zoom
Further Information

Linda Henderson:  The clothing of poor, rural women in the inter-war period: challenging the stereotype through the material culture of the Workhouse

This presentation examines a unique set of records from Torrington Poor Law Institutions to analyse the variety of clothing owned by poor, rural women on admittance to the workhouse.  The commentaries about the clothing reflected changing attitudes to the poor, the types of work they did and the realisation of the physical and mental importance of clothing.
June Hannam: Helen Cordiner: Bath Labour Party activist and social reformer between the wars.
Helen Cordiner, the wife of a cabinet maker, was active in the Bath Labour Party and in the Women’s Co-operative Guild in the 1920s and 1930s and campaigned for better housing, education and welfare services for working class people in the city. She stood many times for election to the Bath City Council without success but that did not mean that she was left without a voice. At various times she was a member of the Board of Guardians, a co-opted member of the Education Committee and the Maternity and Child Welfare Committee and a member of the Bath Infant Welfare Association. This talk explores the importance of one woman’s political activism in a small provincial city in a period in which the electorate had increased significantly both at a national and at a local level.

Professor Penny Summerfield gave an illustrated talk:
‘Self and Society on the British Home Front:  some women’s diaries of the Second World War’
at 6.30 pm at The Museum of Bath at Work

The Votes for Women event at the MSHED was held on Sat 30th June 2018. Information about the exhibition and how you can borrow the banners for your institution can be accessed here 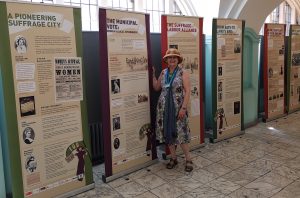 Bristol Radical History Festival brings together historians, history groups, publishers and the public for a day of talks, walks, puppet shows and readings, films, bookstalls and displays uncovering radical histories in Bristol, the South West and beyond. Women’s History Network has a stall at this event.

During the day there will be talks about women’s history.

Celebrate and be inspired by amazing women travellers including Elizabeth Fox Tuckett, Ellen Tanner and Adela Breton. See original objects and talk to our team of curators and experts. Ticket includes a glass of wine and exclusive viewings of the Adela Breton exhibition and Egypt Gallery. This is an event organised in partnership with Bristol Museum and Art Gallery.

A workshop with talks on how COs were viewed in the context of traditional gender identities and roles (Professor Lois Bibbings, University of Bristol); Mabel Tothill (Emerita Professor June Hannam, University of the West of England); women’s resistance to compulsory war work (Lucienne Boyce); and women and objection to military service in the First (speaker to be confirmed) and Second (Susan Gregory) World Wars. Bring your own lunch.

This is a free event but please book your place.

Make More Noise is a selection of silent films from the British Film Institute National Archive exploring the representation of suffragettes in the early 20th century. From footage of suffrage demonstrations to anarchic women’s comedy, the collection was brought out to complement the release of Suffragette.
The film will be shown at the Salt Café Deli, 120 St George’s Road, Bristol BS1 5UJ on Wednesday 20 April 2016. Doors open at 6.30 pm and the film starts at 7pm. The film will be followed by a discussion, and the event will end at around 9pm.

Light snacks and refreshments will be available to purchase.

All welcome. The event is free but booking is essential. To book visit Eventbrite at https://www.eventbrite.co.uk/e/make-more-noise-tickets-22918810780

Alan Freke from Frenchay Museum and Kate Newnham from Bristol Museum will be taking about the Travels, Collections, Art and Writings of Elizabeth Fox Tuckett and Ellen Tanner.

Wendy Cooper, ‘Annie Kenney and her book Memories of a Militant – “simply an account of events that are engraved on my heart“‘
Ruth Skrine, ‘Fertility and sexuality in the 20th century … snapshots from the life of a medical woman‘.
Katherine Holden, ‘Finding the nanny in autobiographical narratives and childhood memoirs‘

Saturday 29th March 2014. Interdisciplinary workshop: ‘Emotion and the Researcher‘, Cardiff University, jointly hosted by WE/SW Women History Network and the Families, Identities and Gender Research Network (FIG). The workshop will consider the role of emotions in research, and the ways in which disciplinary conventions work to disguise the importance of emotion. It will focus on the on the research process rather than the outcomes of research. For further information, contact LoughranTL@nullcardiff.ac.uk

Saturday April 25th 2009: In Response to War: Women, Work, and Memory in the Twentieth Century

Saturday  7th May 2005: Work-in-Progress Day On Women’s and Gender History

If you are interested in knowing any other details about the network, please contact: Kath Holden, Email: Katherine.Holden@nulluwe.ac.uk

Theme by Anders Noren — Up ↑