Set up in 1993 by a group of women academics who wanted to encourage research and stimulate interest in women's history and gender history in the south west of Britain. 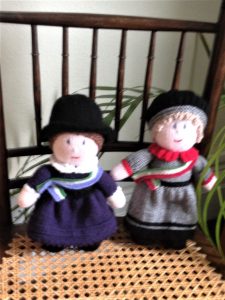 Lucienne is a historical novelist, historian and speaker. Her novels (To The Fair Land, 2012 and Bloodie Bones: A Dan Foster Mystery, May 2015) are set in the eighteenth century. The Bristol Suffragettes, a history of the local suffragette campaign, was published in 2013. She is currently working on a biography of a married couple who were involved in the suffragette, socialist and peace movements.”

June is treasurer and co-chair of the local network. She has been involved with the WHN since it was formed. Her research interests are in feminist and socialist history in Britain from the late nineteenth century to the Second World War. Publications include Isabella Ford (1989); (with Karen Hunt) Socialist Women: Britain 1880s-1920s (2002) and Feminism (2011). Recent publications on Bristol include Bristol Independent Labour Party: Men, Women and the Opposition to War (Bristol Radical Pamphleteer, 2014) and chapters in Madge Dresser ed. Women and the City. Bristol 1373-2000 (2016).

Linda is a PhD candidate in Economic and Social History at the University of Exeter.  Her thesis ”Looking after the Babes” – Class, Gender, and the Nature of Scientific Improvement – a case study of the Aylesbury Duck Industry 1820-1920 is funded by the ESRC and the University of Exeter.  She is also the recipient of a Theodora Bosanquet bursary and a research grant from the Buckinghamshire Record Society.  Linda has published a short overview on the Aylesbury Duck Industry in Rural History Today and has recently posted a contribution to the University of Exeter Economic and Social History blog on ‘Creating new work and a new profession for women’: Florence Nightingale and the Rural Health Missioners of North Buckinghamshire 1891-1892.

Katherine is a founder member and co-chair of the local network and has also served on the steering committee of the National WHN, including a three year term as convenor from 2007-2010.  Her main research interests are in historical perspectives on family, marital status and singleness. She is the author of The Shadow of Marriage: Singleness in England 1914-1960 (2007) and a British Academy funded history of nannies Nanny Knows Best: The History of the British Nanny, The History Press 2013.

Jane is the editor of our newsletter. She has researched and written a new introduction to the 2013 reprint of Maud Davies’s Life in an English Village. With Ruth Newman she has recently written Women in Salisbury Cathedral Close (2014). They also transcribed and edited William Small’s Cherished Memories and Associations for the Wiltshire Record Society (2011) and co-authored Salisbury Past for Phillimore. Jane is editor of Local History News for the British Association for Local History and on the editorial board of Sarum Chronicle.

Julia is a community historian with a passion for engaging others in the co-creation of local histories of social change, ensuring that the role of women in those histories is given due weight. She has worked on a number of projects for Devon History Society (DHS), including Early Victorian Schools, and Devon Suffrage Activists, and she now leads the Devon in the 1920s project, a county-wide research collaboration. She is an Honorary Research Fellow at Exeter University. Her most recent publication, co-authored with DHS colleagues, is Devon Women in Public and Professional Life, 1900-1950; Votes, Voices and Vocations.
The University of Exeter Press – Devon Women in Public and Professional Life, 1900–1950

Diana is a research student at the University of Worcester. Her thesis examines the effects of the First World War on female-run small businesses in Bath exploring both their business enterprises and their personal lives. Her other interests include the history of the British spa town from the eighteenth to the inter-war period with particular reference to women.

Elaine is a history PhD Student at the University of the West of England, Bristol, researching the narratives emerging from the Women’s Peace Camp at Greenham Common 1981-2000. A contributor to Performing the Self: Women’s Lives in Historical Perspective, ‘Women Activists: Rewriting Greenham’s History’ edited by Katie Barclay and Sarah Richardson (Routledge, 2014).

Theme by Anders Noren — Up ↑